The Surat Pink Auto Project was launched in July 2017 on the occasion of the second anniversary of Smart City Mission. Our honorable PM, Mr. Vijay Rupani, inaugurated this initiative to empower women and help them create a sustainable living for themselves. 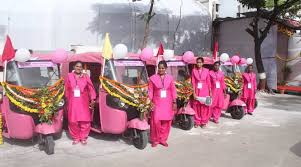 The Pink Auto Project was initiated with a batch of 70 women who were trained and equipped with necessary resources like loans and licenses to begin their venture under the same project. In hindsight, this project was also developed to intensify and install a sense of safety & security for every woman in society.

In this project, pink auto-rickshaws with female drivers would only cater to the women. The project was supported by The Bank of Baroda. The bank gave women auto-drivers loans at 7% interest, so that, they can successfully pay off their monthly bills and also purchase the auto-rickshaw.

The project was successful as it empowered the women, auto drivers, to stand on their own feet. It helped them to create a stable income, which strengthened their future with tons of opportunities and possibilities. The project also contributed to the societal framework by instilling security for female citizens. The Pink Auto project had a dual purpose and multiple benefits, which were fulfilled.

Concluding, it was an exemplary project for all the women who were trained and equipped with opportunity. Additionally, it was also a motivational step for other females in the society who wish to seek success by being independent.