January is finally here and we can’t keep calm as it is the first month of the new year with many different festivals. India is a land of diverse religions and cultures, each culture having a great significance. Every day is a festive day here. The nation has geared up not only the cheer and joy of Makar Sankranti but also the warmth of Lohri and greeting prayer of Pongal.

Yes, January is indeed a month of joyous celebration and series of winter harvest festivals. Different parts of India celebrate these festivals that fall on a fixed date that is 14 and 15th January every year.

Read further to know what is the significance of these festivals. Makar Sankranti also known as Maghi, is a Hindu festival, which is celebrated across India in different cultural forms, with great devotion and fervour. The festival is celebrated in many parts of South Asia with some religious variations. In different parts of the nation, it is known by different names and is celebrated differently.

The significance of this festival day is that after this day, days get longer and nights become shorter. This means days will get warmer and it’s time to bid goodbye to the chilling winter.

Another belief is that Sankrati was a goddess who killed a devil named Sanksarasur. It is also believed that Bhisma Pitamah breathed his last breath on Uttarayan (Makar Sakrati).

The Lohri is primarily celebrated in Northern parts of India with great enthusiasm and spirit. Lohri is also termed as the festival of harvest. The festival is celebrated with joy to celebrate harvesting of winter crops. The traditional time to harvest sugarcane crops in January, therefore, Lohri is seen by some to be a harvest festival. And thus, Punjabi farmers see the day after Lohri as the financial New Year.

Tales from Punjab mention legends of Dulla Bhatti, a legendary hero who lead a rebellion against the Mughal empire. His acts of bravery made him so famous in Punjab that almost every Lohri song mentions his name. 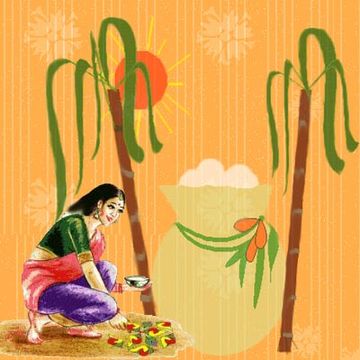 Pongal is an important harvest festival in South India. Pongal is a four day long festival (each having its own significance) celebrated in India which is associated with the tradition of crop harvesting. This festival is widely celebrated in Tamil Nadu. This festival usually falls in the month of January when crops like rice, turmeric and sugarcane are harvested.

History of Pongal dates back to around 2000 years. Originated as a Dravidian Harvest festival which was celebrated as Thai Un and Thai Niradal.

The festival is a thanks giving ceremony in which the farmers celebrate the event to thank the spirits of nature, the Sun and the farm animals for their assistance in providing a successful harvest. The rest of the people celebrate the festival to pay their thanks to the farmers for the production of food